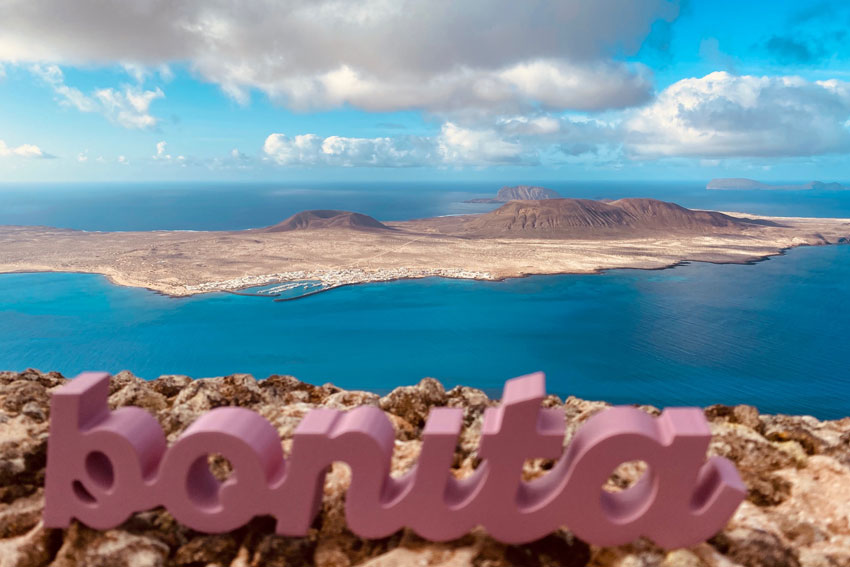 It is part of the Chinijo Archipelago and in June 2018 was officially declared the eighth inhabited Canary island. It is the smallest of them all, as it is only 29 square kilometres, has a population of 750 inhabitants, and is separated from the island of Lanzarote by the 3 km wide strait of sea “El Rio”. Perhaps it is the Canary Islands biggest secret, and one of the most individual and spectacular. We are referring to the island of La Graciosa

It is a very special island, different from any other in the Canarian archipelago, and all those who visit agree on the same thing: they would come back. But … what makes La Graciosa different?

Virgin beaches and golden sand that contrast with a volcanic landscape surrounded by turquoise waters, a place where there are no roads, no asphalt or pollution; just sandy streets and paths that can only be walked or cycled because the circulation of cars is forbidden on the island, except for authorised vehicles.

Located on the Famara cliffs, the Mirador del Rio in Lanzarote is one of the most representative and recognised architectural works of César Manrique, and for many the first visual contact with the island of La Graciosa, because from there you have the best views of the island and the set of islets named Parque Natural Marítimo – Terrestre del Archipiélago Chinijo that make up La Graciosa, Montaña Clara, Alegranza, Roque del Este and Roque del Oeste.

The only way to reach La Graciosa is by boat from the town of Órzola, in the northern part of Lanzarote. The journey takes approximately twenty-five minutes and leads to the small town of Caleta de Sebo, the main urban centre of the island. There are no hotel complexes, no apartment blocks, no streets full of souvenir shops. There, a small fishing village of white houses with blue or green doors and sandy streets awaiting you, where life revolves around the small port, where restaurants and some businesses related to the island’s leisure activities are located.

What to do in La Graciosa at Easter?

Forget crowds, routines and stress for a few hours or days, because here is if there is one thing to breathe it is peace and quiet. If you like hiking, or cycling this is your place. It is immediately impacting on the traveler when they arrive on the island that the only way to get about is by bicycle, on foot or in a taxi jeep. The fact that you can’t travel by rental car has a good explanation, and that is that La Graciosa is a Maritime-Terrestrial Natural Park, and the whole territory is protected.

Distances between 3- 8 km are suitable whether they are done on foot or or by bike on the roads that run through it, because it is a flat island, and the only impediment that can be found is the wind that may blow on that particular day. For those who are not so sporty, or prefer something faster and more comfortable, the other option is to get to know the island by 4x4 taxi, either by taking a tour of approximately one hour and fifteen minutes, getting to know the main points, or by hiring the taxi service to take you to a certain beach and pick you back up at the agreed time. 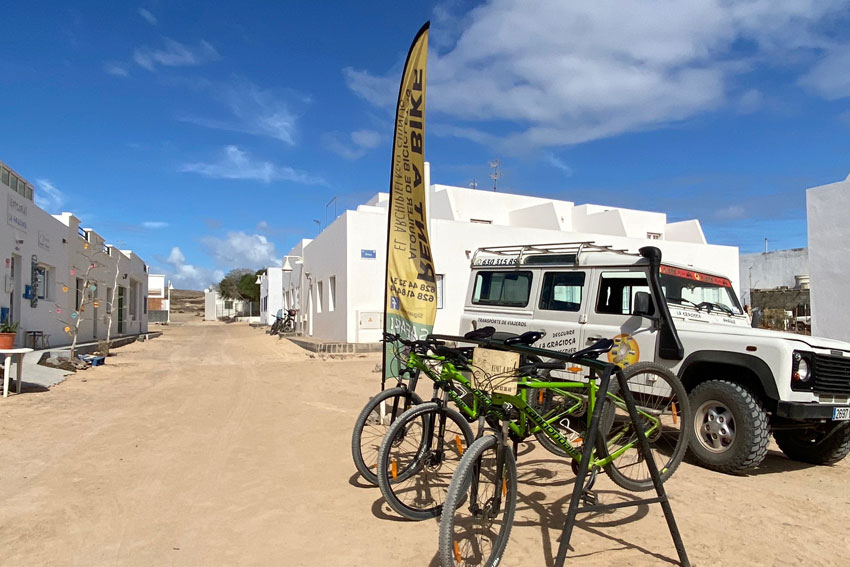 Kayaking or snorkelling in the crystal-clear waters at Playa de la Francesa, or Playa de la Cocina at the foot of Montaña Amarilla, taking a catamaran trip to see the southern part of the island and water activities, and spending a different day out are other options to consider when coming here.

La Graciosa Island is one of the largest marine reserves in Europe. It is the Marine Reserve of La Graciosa Island and Northern Islands, with 70,000 hectares and more than 774 recognised species, making it the best diving destination in the Canary Islands and Europe. On the island there is a diving school where you can take courses from beginners to advanced, as well as PADI certification courses, and also go out to see the wonderful underwater world that surrounds the island, and see species such as the angel shark, an endangered species that can be seen in very few areas of the world. 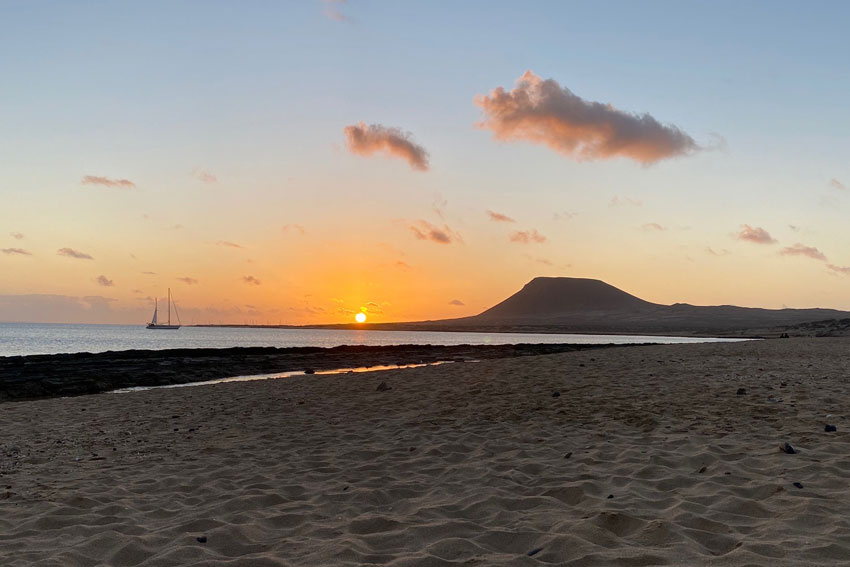 What to see in La Graciosa!

The beaches of any island become the biggest attractions that everyone expects to enjoy. La Graciosa is certainly no different in that sense, since throughout the island, they constitute the focal points of attraction, where people who come here converge.

As the distances are not very big, getting to know its excellent beaches like that of Las Conchas, La Francesa or  enjoying the colours of its famous Montaña Amarilla , the icon of the island, then being able to ascend it to its summit, returning to bathe in its small cove, La Playa de la Cocina, are options that can be chosen on the same day. Some day out!

Not all the beaches are suitable for bathing due to the currents and strong waves in certain parts of the island. Therefore, a safe bet for bathing is the southern part of the island, where you can find the beach of La Francesa, with its crystalline waters ideal for snorkelling, and the small beach at the foot of Montaña Amarilla, La Playa de la Cocina. On both beaches bathing and enjoyment is assured.

In the northern part, you will find  Playa de Las Conchas , the most beautiful and spectacular beach in La Graciosa. Here strong waves and sea currents prevent you from swimming most days. Instead, you can take a walk along its 600 meters of deserted beach, or climb to the top of Montaña Bermeja, which is just behind it, and enjoy the spectacular views of the island. 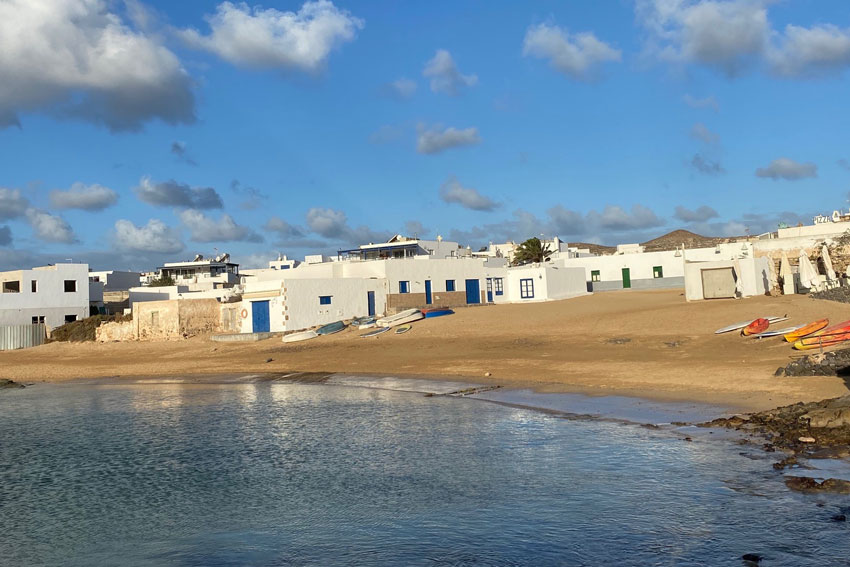 In this area, heading to the other town on the island, Pedro Barba, next to  Playa de Lambra, where bathing is not recommended either, stopping to visit the the Arch of Los Caletones is a must-do, a group of natural basalt arches formed by the erosion of the sea waves that crash against them, and which form a unique natural spectacle.

Many people do not know that La Graciosa is a State Heritage Site, with the exception of the urban centres of the two towns on the island: Caleta de Sebo and Pedro Barba, and it is part of to the Organismo Autónomo de Parque Nacionales. It is a Maritime-Terrestrial Natural Park, which is why the circulation of unauthorized vehicles is prohibited, there is no asphalt, and it is forbidden to leave the designated routes in order to preserve all the nature and animal species, since La Graciosa is a unique refuge and individual habitat of numerous marine birds and birds of prey that breed in colonies on the islets.

Spending a day on the island to get to know it a little better is what many choose to do when they come to Lanzarote to spend their holidays. Taking one of the first boats out of Órzola, renting some bicycles or taking a tour of the island, to enjoy one of its beaches, or eating in one of the restaurants in Caleta de Sebo, and then returning on the last ferries back, is the plan of action chosen by most.

But for those who really want to enjoy the authentic flavour of La Graciosa, riding their mountain bikes, climbing its volcanic peaks and enjoying its views, and beautiful sunsets on Montaña Amarilla, or taste the local fish in its restaurants, spending 3-4 days here is one of the best options. It is a few days of total disconnection, where you will have time to discover every corner of this magical island.

Without a doubt, such paradises exist, there are very few left, and we are privileged to be able to enjoy them, but we must also know how to preserve them. It is a raw jewel, a stress-free place, different, and a place where time seems have stood still and you will only want to return there once you have visited.

If you want to know more about this particular paradise, about how to get around, what to do, routes and activities or excursions and advice, you can find more information at www.visitlagraciosa.com