9 places to visit in Lanzarote 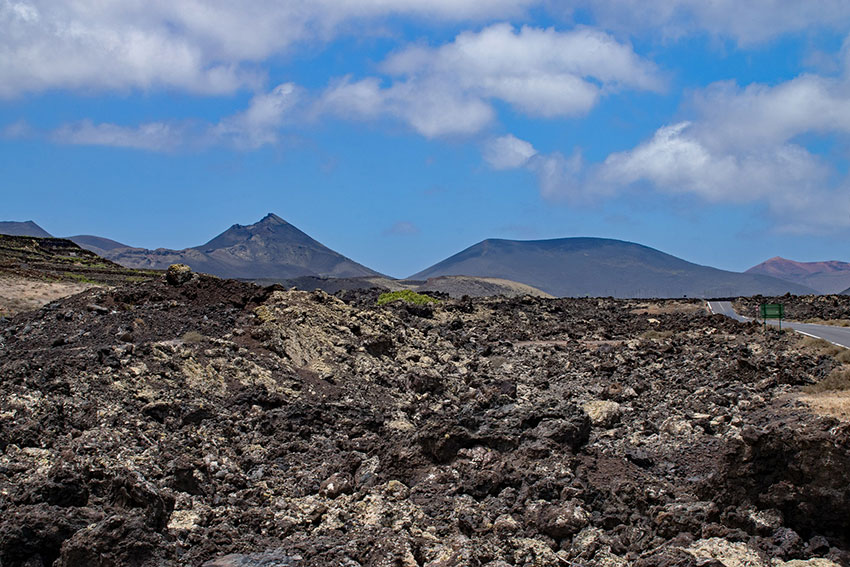 If you are planning to come to Lanzarote and leave with your duties done, having enjoyed beaches, caves, volcanoes, vineyards, charming villages, art… and spectacular landscapes… in one week you can get to know the great secrets that this island has to offer.

Lanzarote is the island of contrasts, where you can enjoy sunny days on the beach with incredible crystal clear waters, but also discover an island of volcanoes where each place makes it completely different from the other Canary Islands.

Places not to be missed on your trip to Lanzarote

Therefore we propose a list of essential spots not be missed if you come to Lanzarote. Plan your days and routes, because it will give you time for everything. This is our list of places that should not be missed: :

PLAYA PAPAGAYO, ONE OF THE BEST BEACHES IN LANZAROTE

It is one of the most popular beaches in Lanzarote. A very quiet beach, in a small cove between the mountains, with white sand and crystalline emerald waters perfect for snorkelling.

It is about ten minutes from Playa Blanca in a protected area, so you have to pay 3 euros for parking. In this area, about 2km away you will also find other coves like Playa Mujeres, El Pozo, Caleta del Congrio, Puerto Muelas and, of course, El Papagayo. 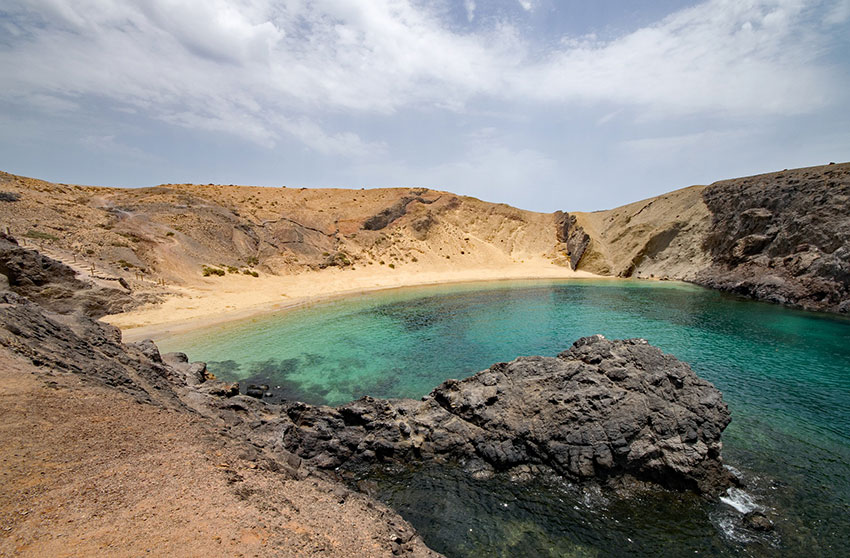 Located in the southwest of Lanzarote, is a very peculiar landscape, because of its cliffs that are formed from a layer of lava that reached the coast creating caves and a very different looking landscape. Have your camera at the ready because, if the sea is rough on the day, when it hits the caves and rocks beneath us, it produces a spectacle never to be forgotten. 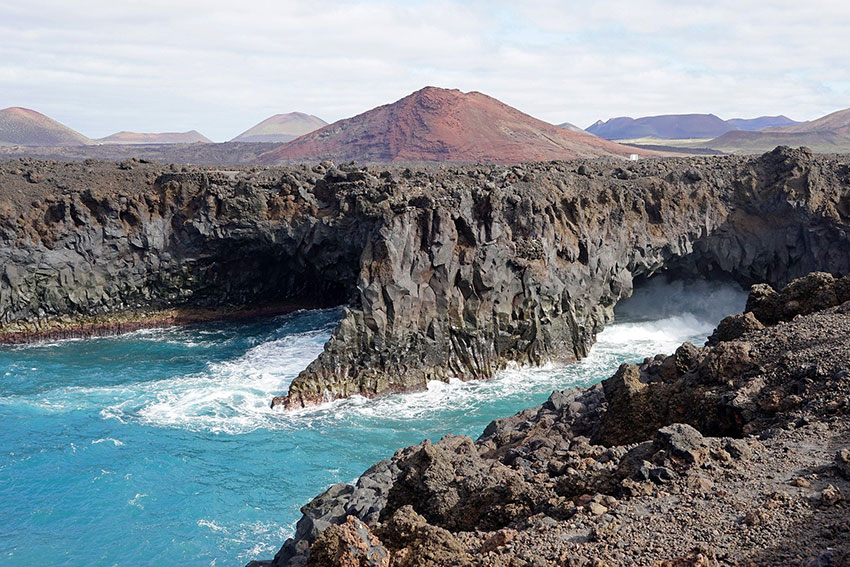 Visiting Timanfaya is a must. It is located in the southwest of the island, and can be reached by road from the towns of Yaiza and Tinajo. The numerous volcanic eruptions that have occurred in the past have given rise to geomorphological structures of high volcanic interest, in fact it is known as the Fire Mountains. A unique place worth visiting for its beautiful scenery.

Visits are not allowed freely, as it is a National Park and the territory is protected. A guided tour is required, and the car should be left in the right place, take a tour bus that will amaze you will a full 14km panorama of the area.. From the bus you will observe the craters, landscape and the traces of lava from the eruptions. One of the most famous tourist attractions of Timanfaya is the camel ride. 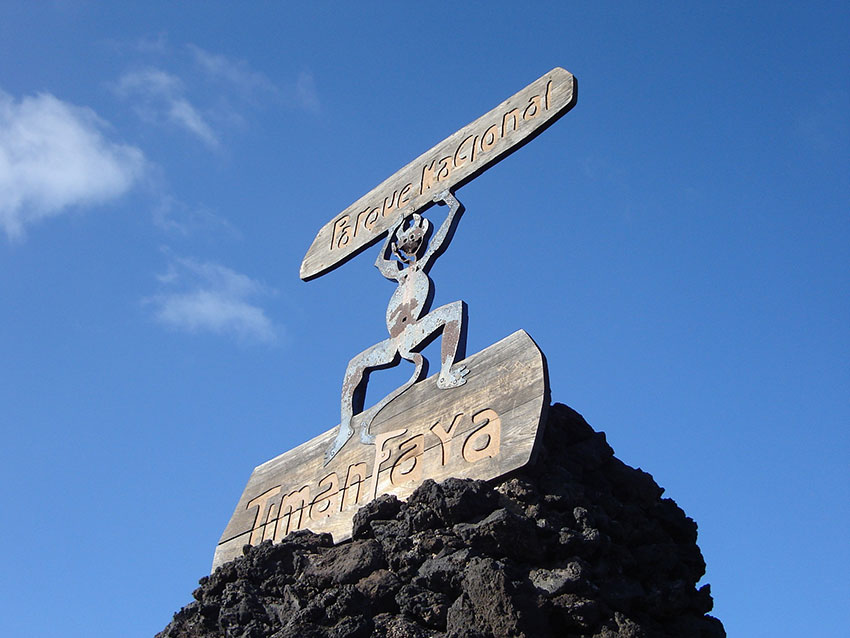 It may seem strange that in a volcanic and dry landscape like Lanzarote there is a wine area where excellent white wines are produced. La Gería is known as the wine route of Lanzarote and is unique due to its volcanic landscape, which is used for planting vines and producing wine, the Malvasia variety being in abundance. It is situated in the municipality of Yaiza, in the southwest of the island.

It was declared a protected landscape because of its peculiar characteristics, since it is a combination of volcanic lands with vine cultivation. La Gería Natural Park is part of the municipalities of Yaiza, Tías, Tinajo, San Bartolomé and Teguise. 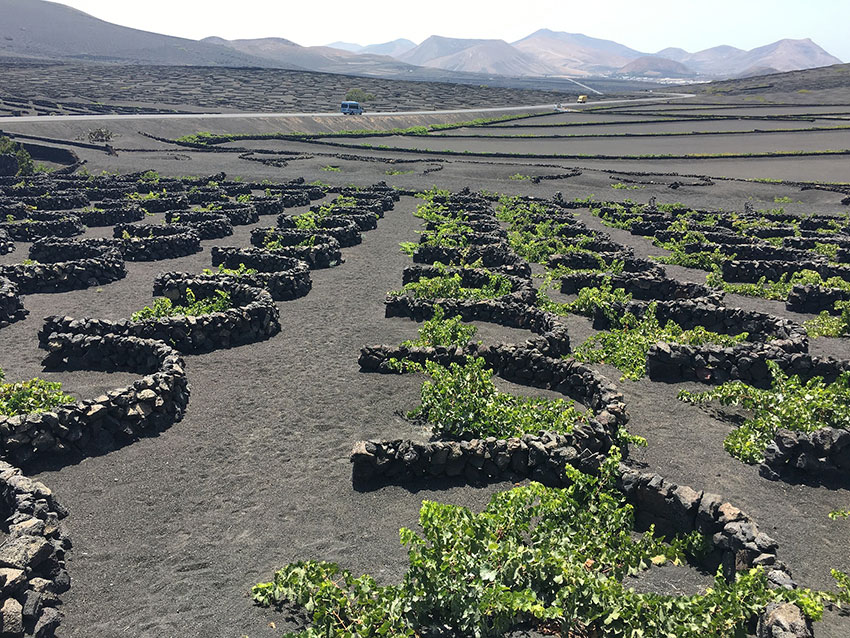 TEGUISE, ONE OF THE MOST BEAUTIFUL VILLAGES IN LANZAROTE

This town is located in the centre of the island. It was the ancient capital of Lanzarote between the 15th and 17th century. Declared an architectural-historical-artistic remains, it is one of the oldest villages.

Streets, white houses, the castle of Santa Barbara, the church of Our Lady of Guadalupe among others, mean that from January this year it is officially part of the select group of the most beautiful villages in Spain.

If you have the opportunity to visit it on a Sunday you should not miss its popular market, where you can buy ceramics, natural and typical products, such as cheese, wine or also products made from cactus and aloe. It takes place in the old town from 9h-14h, and has become one of the most popular markets in Lanzarote. Although if you prefer to enjoy this village with tranquility, avoid Sundays. 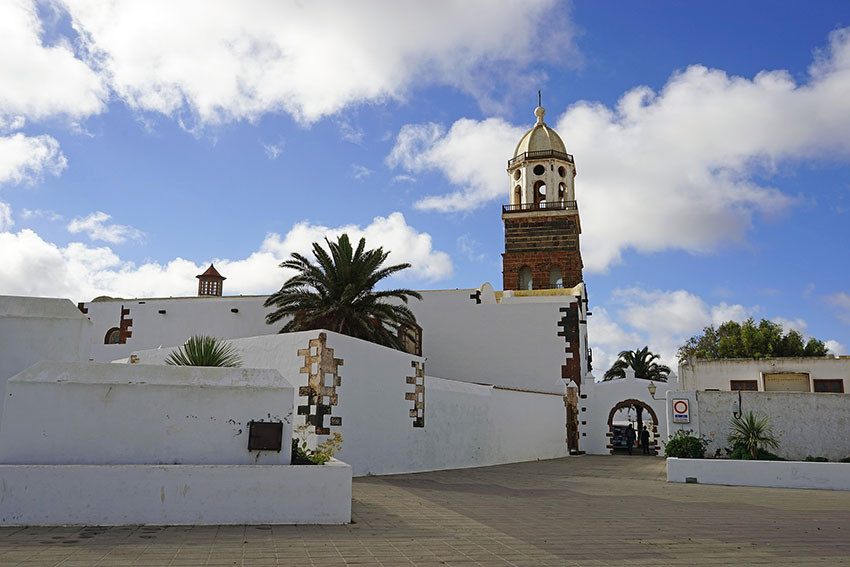 If there is one name that is closely linked to the island of Lanzarote, it is that of César Manrique. A multifaceted painter, sculptor and artist from Lanzarote, many of whose works can be seen on the islands, but there are two that you should not miss on your visit to the north of Lanzarote: the Jameos del Agua and the Mirador del Río.

In the north of the island of Lanzarote, at the foot of the La Corona volcano, there is a natural space of cave and tunnel systems, which result from the end of a lava tunnel, which César Manrique transformed into an idyllic place; a centre of art, culture and tourism, with an auditorium, bar and swimming pool in which there is an underground lake. What is more, here you can see small albino crabs, unique to the world. In addition to the impressive volcanic cave and lake, there is a museum dedicated to volcanoes with interesting interactive activities. 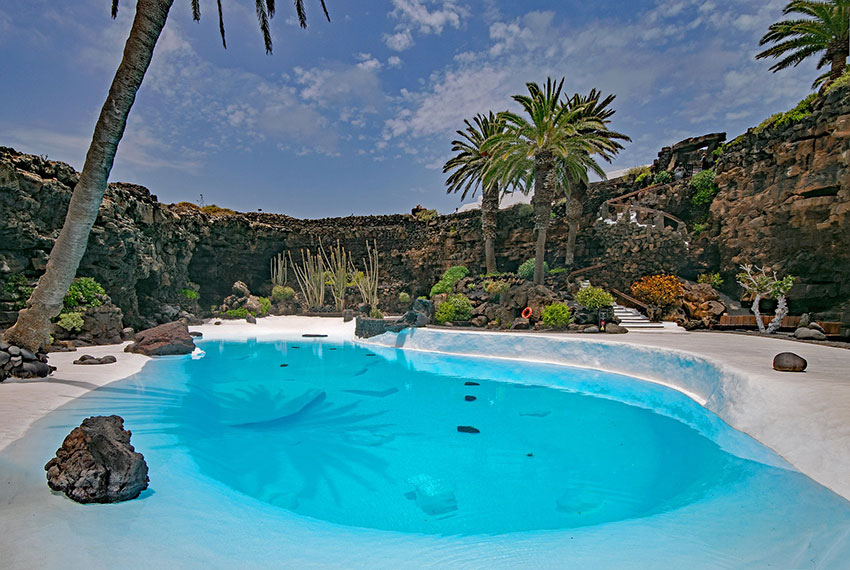 And once you have left the Jameos del agua, in the north of the island, you can go to the Cueva de los Verdes, as they are just a few kilometres away. It is a volcanic structure, formed by a tunnel and underground tube systems (jameos ) about 6 km in length, one of the longest in the world, which were adapted to 2 km long for public visits in 1964. It is one of the most interesting volcanic formations in Lanzarote. 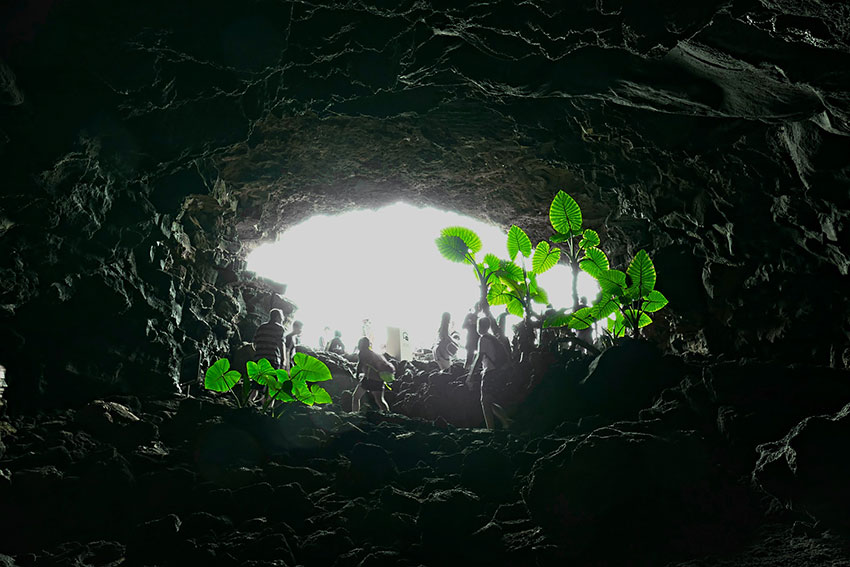 El Mirador del Rio is the best viewpoint in Lanzarote, one of the most representative architectural creations of Cesar Manrique. From there you can see the strait of sea called El Rio, which separates the island of Lanzarote from the island of La Graciosa. The viewpoint is in the north of the island, and is located on the Risco de Famara, at an altitude of 400 metres. Have no doubt the views are spectacular, and when you are there you will want to visit La Graciosa . The visit at the viewpoint costs 5 euros and its schedule is from 10h to 17:45h. (In July, August and September it closes one hour later). 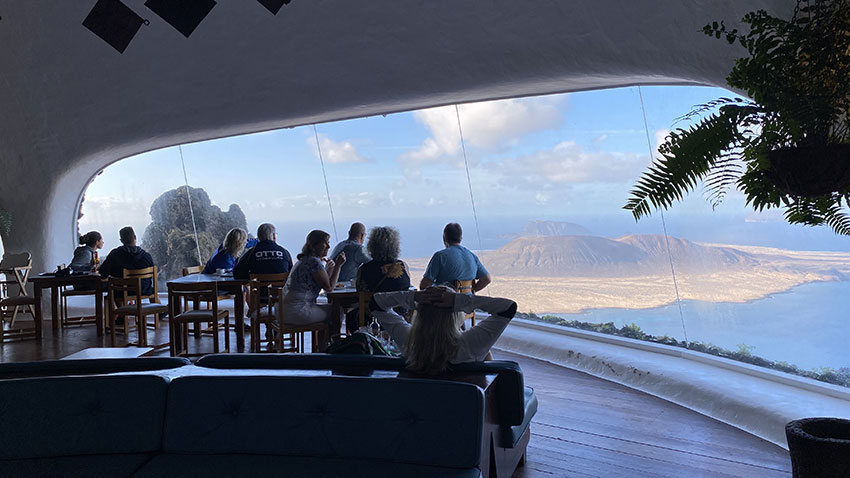 Don’t get left out in the cold, and reserve a whole day in your diary to dedicate to the eighth Canary Island. To do this you will have to go to the town of Órzola, which is where the ferry to the island departs from.

Without doubt, a different island, where there is no asphalt and the only way to get around is by bicycle, on foot or by Jeep Taxi. An island of just 27 square km that is crossed only by pathways that will take you to the spectacle of Playa de Las Conchas or the famous Montana Amarilla. If you need more information about routes, how to get there or what to do for a whole day in La Graciosa, visit our website and plan your day in this small Canarian paradise. 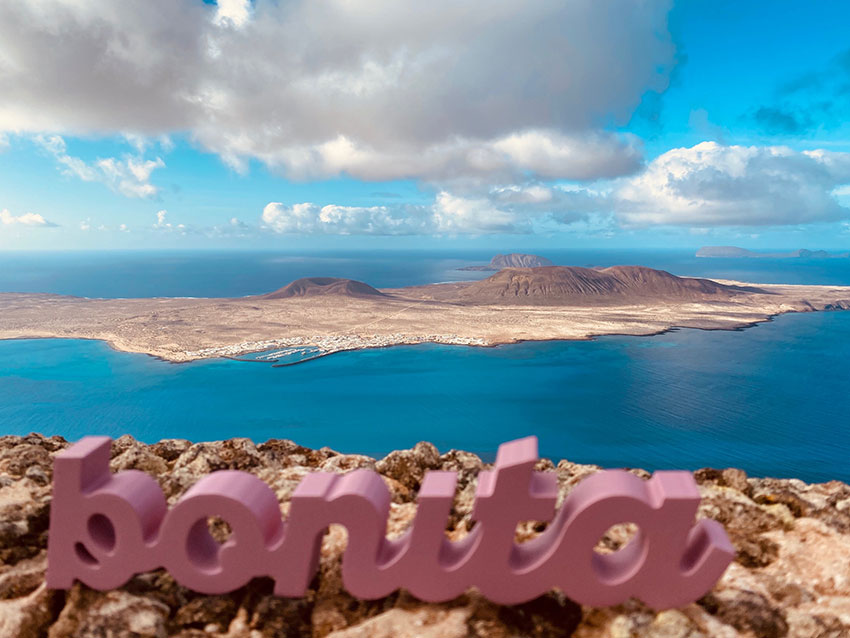